A weekend of trails

Saturday I hit the Holdridge trails for 20 miles of fun. Kai, Matt & Suann all were there to join in the fun.  The first miles had an occasional section of mud. Nothing to report about just the kind that adds some fun to the singletrack. Then we started hitting some standing water sections.  Each one got longer and deeper as we made our way through the woods. It wasn't the pace that had my heart rate so high it was all the fun I was having on run.

On top of that we found a the skull of a raccoon, a tree that was burned by lightening and a frog. It was a great start to the weekend. 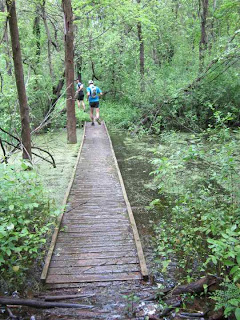 Then today I ran the trail at island lake.  Word was there was a lot of standing water around knee deep. Also a lot of areas with slippery mud. I set off to see what I could find. What I found first was that the temperature rose to 90F. In the non shaded sections it felt like an oven just running through the heat. Mile after mile there was an occasional spat of mud. Of course I made every effort to step in it too! The pace held even throughout the run. Then I approached mile marker 8.5 and knew I would be seeing the flooded area.  Coming out of the downhill and rounding the corner I saw the river had expanded and was covering the trail 100 meters wide. The cold river was flowing slow over the trail which felt refreshing. It was just under knee deep. Once through it only took a mile for my feet to start to dry out again.  A few miles later I finished at mill pond and waded in up to my shorts to cool off.

Overall, I covered 32 miles on the trails this weekend over those two runs. The second run I pushed a nice steady pace of 8:35. The two courses will see me a few more times before summer ends. Some good quality time will be spent here!
Posted by Unknown at 7:50 PM

Email ThisBlogThis!Share to TwitterShare to FacebookShare to Pinterest
Labels: None