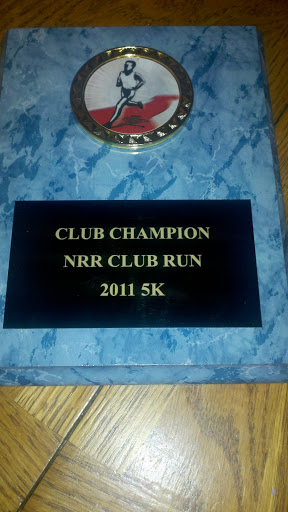 Tonight I heard there was a 5K race being hosted by the NRR group. Since I have been feeling rather good lately in training for my mile PR I thought why not give it a try.

Once we were all gathering around the club director took me on a .1 mile jog. As we warmed up he explained that it is an out back all down hill out and all uphill on the back. I thought wow great breaking my PR of 19:35 will be tough. So let me just do my best.

Toeing the line I had some nervousness in running the race with no garmin for the first time. Running on feel is my plan so currently I am using a basic ironman Timex with a chrono.

The starter yelled ready, set, go and a quick tap of the watch and I was in motion. Rounded the first corner and taking off in first I began to worry if I was faster than I should be so as the next runner approached me and I could hear his breathing I settled in with him.

We hit the first mile in 5:57 just seconds apart and sticking close. I kept listening to him and wondering if I could hold on that fast. This was faster than I have ever ran a 5k. Moments later we hit the turnaround and clocked in at 9:27. I shouted a strong hello to Dick West, the amazing ultra runner, then realized my breathing was not to labored. I then made my move to regain the lead. Every stride I was gradually pulling away. I eclipsed the second mile at 12:13. Feeling good I held in there.

Coming into the last mile I looked back and noticed I had grown the lead and no one was directly on my heels. I felt so lucky to be in this spot. For me to lead a race is not an everyday thing so I just hoped I could not screw it up. Mile three passed at 18:36. Now I knew I had not only a chance to win but also the chance to achieve a new PR.

The biker pacing me said I will race you in and my heart filled with excitement with those words. I pushed that last .1 mile hill climb to the finish in 33 seconds and crossed not only first overall but with a new PR of 19:09!!

I am so happy more with the PR because any given race it just comes down to who shows up. Today just happened to be my lucky day.

In addition, to winning the plaque I received a bottle of wine. Great day all around.

Email ThisBlogThis!Share to TwitterShare to FacebookShare to Pinterest
Labels: None