Over the weekend I jumped a flight to Burlington,VT for some "winter experience." Friday night I arrived and Kelly took me downtown to see the local winterfest. Had a great farm to table meal at local restaurant then did some window shopping and sightseeing.

Saturday morning up and going. Looking out the window I could see the fresh snowfall that occurred overnight. The temperature was a "real feel" of 4 degrees. Now I was excited to run in the snow but not so keen on freezing temps. After a quick breakfast we headed out for a 12 mile run. Once we got on the trails we soon discovered there was a thick layer of ice under the snow. The downhill sections were a bit tricky to keep traction and not fall. I hit the ground twice without any major damage. I was quite impressed to see some mtb tracks on the trails too. You could tell they had some difficulty in some section too.

In the afternoon we headed on a road trip to Smuggler's Notch. There is a seasonal road/pass between Smuggler's and Stowe. So we parked the car and headed on to the road. It was a gradual climb of 800' over the 1.5 mile to the top of the pass aka Top of the Notch. Along the hike there were several areas you could see ice climbers, snowboarders in the back country and snowshoes taking in the day. 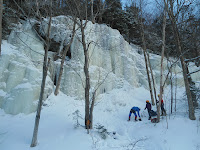 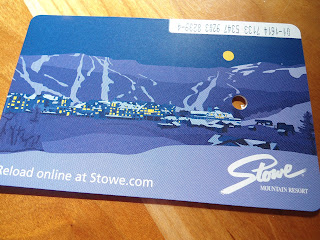 Sunday I awoke to the big day, not the super bowl, but skiing at Stowe!! Another single digit morning but there was no way I was going to miss this day. Once I was set with all my gear for the day we headed into the lodge for some breakfast. Kelly is a ski instructor at Stowe so we sat with the instructors eating breakfast and talking.  Looking out there was not a cloud in the sky and even with the single digit temps I was ready to go. Since I have not been on the slopes for six years we started me off with a easy run. After two runs at it I was ready. Kelly went off to teach for the day and I went off to find bigger runs. The first intermediate hill I found was off the sensation lift. The lift was the longest ride I ever had and as I neared the top the pines were all covered in a blanket of powder. Still not a cloud in the ski and just the most pristine views for miles! 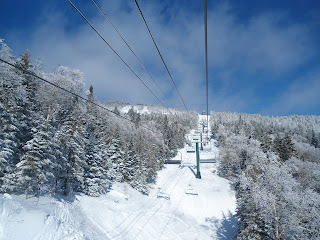 I skied the first half of the day all off runs of sensation. Sensing my confidence building I wanted to take on some back country powder. So my last run before lunch I figured I would take on a diamond. Making my way on to Whirlaway I took a second glance at the caution sign and glanced down the narrow 15' wide trail then committed myself to going. The first part was scenic and easy then I saw what was ahead and stopped on the run. Nervous a bit that this could be a bad choice I hesitated and changed my mind. It took only a few minutes to side step my way back to the top. One reason I picked it was that I saw no traffic on it all morning and figured it would be a better choice for me. I was back at the top and no one came through that entire time.

Well I then stopped joined Kelly for a quick lunch at the lodge. She said that I should spend the second half of the day on Mt. Mansfield so that I can take in both parts of Stowe. My legs were still feeling good and my confidence was hanging in there for some more challenging runs. So off to Mansfield I went for the a few hours.

I took the gondola to the top and more amazing views of the area and powder were all around me. It felt like every minute the day was just getting better and better. Heading down the first run I could feel the trails getting faster from the morning runs. A few passes down the mountain and I was enjoying it more and more. Then I took the double to a point on the mountain and came across another narrow chute of a trail. After backing down from the Whirlaway I said to myself, "step it up." So I dropped my tips down and took the plunge. It was a fast run with a few moguls. I was able to maneuver it and made it back to the bottom. 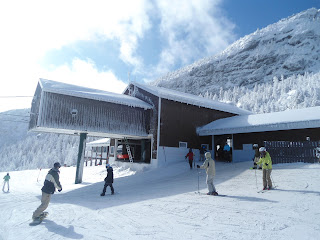