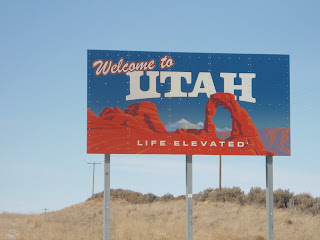 Been looking forward to this race for several months. Signed up with my friend Lauren to do a run together. This was ideal to see where my winter training had yielded. The plan was to run together and then push the last several miles.

Race morning up and wide awake by 6:00am. Solid night of sleep and nerves were calm. We arrived in the Gemini Bridges parking lot a bit after 7:00 am for an 8:00 am start. Looking up at the mesa in front of us was amazing. Once we had our bibs we relaxed for a bit before heading to start line. Right on schedule RD Chris Martinez counted us down and then we were on our way.

First mile out was a brief climb on a jeep road that placed us between two huge mesas. Then it was several miles of flat running. I snapped several pictures while meeting a few runners. Some runners provided me insight on some spectacular views. With another quick climb we were arriving at the first aid station (5.5 miles in 58 minutes). A brief refueling and we were back out.

Next few miles were some brief up & down run able sections. Then came a bit longer climb that placed us on the rim of mesa now looking down on our car. Arches National Park was across the view too. Snapped a few more photos then switched to video mode for the downhill section that would be leading us to the next aid station. Feeling great I ran a sub 8 minute mile while taping. Reaching the second aid station (13 miles 2:20). Here we noticed my left knee had a quarter size blood stain. Not sure how that happened. Which I had a cool story like a gecko bit me or a snake, but no idea of what was the event that caused it.


Moving on it was still a continual downhill section. It went by rather nice and the day was warming up nicely. Reaching the third aid station (17 miles at 3:05).


Mile 17. Snapped pictures with Lauren, Keith, and Bill. Then headed down jeep the road back to the split. Working our way from aid station 3-4 via Goldbar. From the bottom, it was a 3 mile climb to the next aid station. Now were running on slick rock from cairn to cairn. Occasionally a small tree or shrub would also have a trail marker. Views were getting more spectacular . Checked into aid station 23 mile (4:15).


About 2 more miles of climbing up and down the top of the rim, finally we started a descent descend. The tempo seemed comfortable ensuring foot placement, not to be tripped up on anything. Hitting the bottom of the canyon the sand got deep for a short section. Then the next 3 miles became a slick rock series of domes. Up and down was the theme for 45 minutes. Reaching the final aid station 29 mile (5:55).
﻿ ﻿

The final leg started out down a gently jeep road that shortly dipped over the first few miles. I was getting hot and had now removed all 3 layers. About mile 31, a mountain biker was next to me. I offered him some free shirts to escape the weight from that point I wanted to see what my legs had left. The pace quickened to a sub 8 minute mile and I ran the last four miles with all I had in me. A few photographer were in the last mile, so I made sure I had good form as I approached. With the last mile being a steep curvy downhill, that you can get a lot of speed and with all the cheering, it brings a lot of excitement to the finish.

﻿﻿
Finished up at Poison Spider next to the Colorado River was incredible site. Tons of people were hanging out and sponsors all around showing off the new year. What a great first ultra of the year!