Well the final week of camp was amazing!! It was suppose to be a low mileage taper going into the big camp race off this Saturday.  There looks to be a big turn-out in the race. The weather updated to some possible rain and temps near 80F. What can you say when you run for hours and hours the weather will always change by the time you finish. So I will make the most of it. 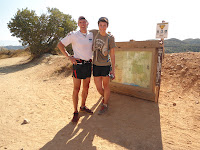 Sunday kicked of the week with some backbone trail running. Will Rogers to the hub (16 miles round trip). Tiffany held back a bit because she was running Twin Peaks later in the day. Here we are at the hub.

Monday headed to Malibu to watch the sunset with The One. Ran Point Mugu up as the sun set then then down in total darkness (6 miles round trip). The weather was ideal on the run up and the stars were incredible on the return down. The best two trails in California are the Ray Miller out and the Ray Miller back. Tuesday went bigger and tougher on part of AC 100 course.
We went from Chantry Flats up to Mt. Wilson (14 miles round trip).  I was told there would be ice cream at the top. upon arriving at the top we noticed they were closed for the day. The run back down was quick and exciting!

Later got to watch some baseball. Which was a tough game for the home team. We still enjoyed the time there.

Wednesday was a free day from running. So we hit the beach. Water was a bit cold with some small waves on the ocean. There was some volleyball going down with the campers. We didn't have a lot of time so we watched for a bit. Then tThursday headed to the valley for a short four mile run with 20+ other campers. The fog was intense throughout the run. Would have taken a photo but there wouldn't have been anything to see.


Back in my cabin gathering up my race gear for the race tomorrow. The President, Majic, Milkman, Green Hornet and Tumbleweed can't make it, but all ran it in the past. They have some ambitious expectations for me. Going to do my best and try to hold back on the speed on the first loop of 25 miles.
Really want to run a strong race. Well I should be able to be tracked on the North Country 50 mile site.

Take care and love you
Steve