The plan was to make this last weekend a super long running event. First was Tie Dye 32 miler in Ohio and the second the Pinckney 50k in Michigan.

Coming off a PR two weeks ago I wanted to push it hard again for another shot. It is a four mile road section out and back then four loops of seven miles down into & out of the Clifton Gorge. Coming off the first loop with the spur I had covered 11 miles in just under 1:30:00. Mentally I was in a euphoric stage. Running was feeling good and I was on pace to beat that PR. By the time I ended the second loop at 18 miles my euphoria had left. It was replaced with cramping in my calves. In addition, running was getting harder to push along at that pace. Third loop started off tough then just got tougher. The sections on the previous loops that felt runnable felt only joggable at best. Now it had been 4:15:00 with 25 miles completed. Ready to throw all I had into the last loop a huge rainstorm unleashed with the temp dropping into the 30F's. My breath filled the air in front of me causing a bit of impaired vision. My hands starting to freeze because of the cold rain running down my windbreaker onto my hands. What was becoming a tough race just stepped it up to a whole new level. In the end I crossed the finished around 5:43:20. Not sure of my placement with nothing posted at this time.

Today I got back up and took another stab at the 50K distance. Lots of great friends all gathering at the start line. The course was two loops of 13.1 then a 5 mile loop. The first loop I joined a nice pacing Congo line and took in the conversation as my legs powered along near a ten minute mile. Slowly I drifted back mile by mile until around the ten mile mark. Then Javier caught me and brought encouragement for me. I followed into stride with him. Wanting not to fall back even more I dug deep to stay with him. Javier was a hero bringing me into the finish of the first loop at 2:30:36. Not sure I could make the day I opted for a new plan by doing the five mile loop next. Ryan Miller joined me and we took it easy laughing & talking away the miles. The loop went in just over an hour. Now I had a problem! I thought six hours at the most and I had to work at 2pm. It was now 11:25 and best guess was three hours to finish another long loop. That didn't fit the equation so I called it day.

All in all it was a tough 50 miles of running this weekend on tired legs. Both courses offered some rocky terrain in preparation for Massanutten. Tie Dye had some serious rocks which in the end will pay off at Massanutten. So with the books almost closed in training, you could say I am almost famous. As the picture states, ha ha. 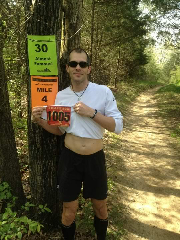