Courage is the result


"Most people run a race to see who is the fastest. I run to see who has the most guts." -- Pre


Last weekend I worked against myself and a not-so-stellar 50K performance at the Fool's Day 50K which resulted in a 5:55:55 finish time.  Learning from those mistakes and feeling much better I added some courage & went  for my best effort.  Recently, I read an article about runners running in their comfort zone and not taking risks. Looking at this as another training run towards Massanutten the decision would be to take a risk with some courage.

Setting out on the first of three loops I came set off in motion. Running the flats, downhills & uphills with an all out effort. Completing the first loop with 100% running was the objective then after that see what I could do to repeat it for two more loops. The ten mile race started ten minutes before us and before I realized it I was catching & passing them.  Dustin Smith settled in on my heels as we went stride for stride in the first loop. It was a great feeling knowing he was right there pushing along with me. Around the third mile I mentioned the pace was quick and he said let's kick it up for a half mile. The pace pushed even harder as we sprinted past another dozen or so 10 milers. Shortly after mile five my right leg from the middle of my hamstring to the bottom of my foot went numb. Betting on it passing I pushed it even harder for the next several miles. In the ninth mile feeling returned to my leg, but pain was slowly settling into my muscles. Then every mile the splits were getting quicker. By the time the first loop was completed we had past about 70% of the ten milers closing it out in 1:16:29 (7:48 per mile).

Moving out for the second loop the trail was a lot more vacant. There was only a handful of runners now on the course. This is hazard for me, I tend to drift off pace when no one is around me. Most of this loop Dustin and me took turns passing each other back & forth. At mile 15 I checked the split of the race. The Garmin was showing 2:05:25, now an average of 8:20 per mile. My legs were feeling the affects of that strong first loop. Continuing to take a risk and push myself as hard as possible was at the forefront of my mind. More miles were knocked with the second loop now completed in 1:34:39 (total run time 2:51:08).

Realizing that shot of courage was putting me in the range of a new PR with only a loop to go I had to dig deep pushing past the pain that had settled into my body. About three miles into the final loop I was next to Dustin again then stopped abruptly to let him pass. He asked as he passed if I was ok. I replied, "I should be keep going." Something in my stomach had taken a turn for the worse and I was not sure how this was going to turn out. After walking and taking a few stops for the next several meters things settled down. Back to running it was for me. The last four miles it was the run everything motto no matter how much it hurt. Not wanting to be passed after putting so much effort into the what I had covered I was able to finish the last loop in 1:45:34 with a finish time of 4:36:43. This gave me a new PR by eight minutes with a tenth place overall finish.

Taking a risk was painful, but it was a rewarding experience stepping out of my comfort zone. It gave me some insight about how I handle things in life & running.  In two weeks I head down to Ohio for the Tie Dye 50K the final training race before Massanutten. I will bring some more courage to race. 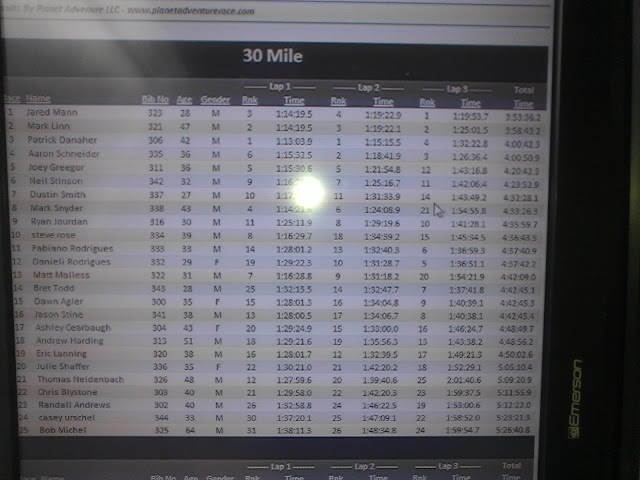