Leading the way through the night

Saturday September 8, 2012 just a few minutes past midnight in the middle of a huge rainstorm I await for the arrival of two friends. Todd & Emily Bello who are in the midst of the Hallucination 100 Mile race. Not only were they running this one they had recently completed three other 100 Mile races in the Midwest Slam.

I met them back in April 2010 at the Pittsburgh Marathon. All three of us were there to pace the marathon. A conversation started up about ultras and I steered them into signing up for their first 100 mile race. That June they toed the line for the Mohican 100 Mile in Ohio. As promised my friend Keith & I showed up to pace them the last half of the race. It was a great adventure and the four of us crossed the line holding hands.

Well they asked if we would help again this summer. With conflicting race schedules it turned up we would be able to pace them at the final race of the series. Keith was coming off and injury so we decided to split the pacing up. I would start at midnight and pace 34 miles. Then about eight in the morning Keith would pace them the final 17 miles. This would make it possible for me to get to work on time too.

Waiting at Hell Creek Ranch to pick them up at mile 50 in the race I sat and chatted with Emily's dad. He briefed me that the rainstorm had slowed them down a bit and they were looking forward to meeting with me for the night. Around two in the morning they arrived with smiles & hugs. Filled with excitement I was ready to lead on through the night. Another friend of ours Kai, who was running the 100 mile too, joined us for the first 17 miles. I took the lead and off into the cold rainstorm we went. The temp was in low 50's and rain fell constantly making the trail a small river at times. Other times it was a nasty muddy mess that would try to suck the shoes off your feet.

As a pacer I try my best to ensure I do all the problem solving without them knowing a problem might occur. Keeping them in positive spirits is the main goal. Three issues came up and without them knowing it all three were resolved. Only after the race did they learn about them. The first was that Emily was getting cold so I gave her my arm sleeves to fight the chill. Quickly after giving them to her I realized I was getting cold. Knowing that I only had to run a small portion of what they were doing I pushed on without hesitation. Second issue came towards the end of the loop when I kicked something hard that knocked me to the ground. A bit shaken I said, "all good let's move on." It felt like I had broken two toes. Not wanting to bother them I just kept running. The final issue was that we were slightly behind schedule and I needed to get to work. So I arranged it that I would continue to mile 71 then head out. Then Keith would join up early at mile 75. This way they only had 4 miles to travel alone. Sure enough it worked out and Keith arrived 15 minutes before them at the aid station.

In the end, I was able to spend about seven hours in the middle of night running through a cold rainy storm on trails with my friends. I am sure they would do it for me if I asked them. They told me that in 2013 they have something big planned and wanted to know if I would pace. Let's just say I have that date booked for them and will be ready for another adventure!! 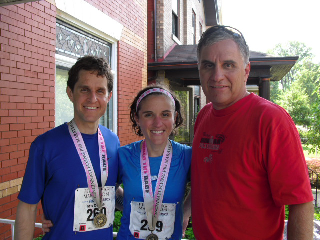