California or was it the Sun? 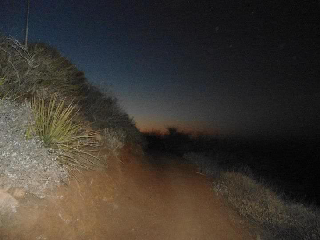 Over the past few days I headed out to California to spend some quality time on the trails with my girlfriend and friends.  Erin was celebrating her 10 year anniversary of living in CA. The plan was to run the entire Backbone trail which is a point to point run in the Santa Monica Mountains.

Flying in Friday evening I saw a forest fire as the plane touched down. Erin informed me that that was close but not on the trail we were going to run on Saturday. A forest fire is never a good thing because it can get out of control quickly.

Saturday morning we headed to Point Mugu to start the 68 mile run at 5:00 am. The stars were bright and nice 70F air temp. The forecast was 95F and we wanted to get some mileage knocked out before the heat started to take its toll on us. The first portion of the day felt good then as we hit open exposed areas I felt the heat quickly increase. Flashbacks of the AC100 ran through my mind. Sporting two handheld bottles I was armed with 32 ounces between water stops. Knowing I average 16 ounces every hour I needed to control my consumption to make some sections.

The biggest challenge of the day for me was a 18 mile stretch with no water stops. I tried to hold back on drinking but the temperature was rising. With 10 miles to go in section I was down around 12 ounces. I started to worry that I was going into a really bad place. Four miles later my bottles were empty. Kate Jobe was able to flag down some mountain bikers and score me about 20 ounces of water. Sadly, two miles later I was out again. Erin, Kate and I gathered at a road crossing. Erin arrived a few minutes before the two of us and had a few cold bottles of water. While she was there a gentleman showed up and after talking to her went & got some water for us. Then we all began searching nearby homes for water. Luckily, we found a homeowner that helped us out. We refilled all our bottles, got some ice, and some citrus fruit. The woman was so helpful without her we might not have made another step.

Finally after making it to mile 27 our first real aid station I was spent. Sitting there I drank 96 ounces of coke, cytomax and water. Miles had passed since I stopped sweating and peeing. Hoping to replenish all my lost fluids so that I could make a comeback and finish the run became my only goal.
After leaving the aid station it was 12 miles to the next aid station. I planned a bit better and added a third bottle to pack to make the distance. A few miles passed and I started to feel strong again. I had finally reached my comeback and pressing forward with a smile once again.

When we arrived at mile 38 it became official that our run was over. A suspected arsonist had started a forest fire in the later portion of our run. So making it to 50 miles was a possibility but there was a stronger possibility that our aid station wouldn't be there. Not needing to add more danager to the day we all bowed out. No one wanted to do this but safety was the main concern.

We will all return in the spring to repeat the journey but the next time will be the entire 68 miles.