**I will add more pictures by June 2. Here is the race recap with a few pictures for now....

Sunday morning Andrew, Ken & I to take the trails in the Wild West 100K in Lowell, MI. Sounding like a simple 10.33 mile loop repeated six times or completed 3 times for the 50K runners. The description was a some jeep roads, grassy plain area and a knee deep stream crossing. The only requirement was you had to finish by dark 9:00pm and with a 7:00am start. Given 14 hours seemed very possible after reviewing the 2008 results; which was the last time they held the race.

Gathering up in the starting the coral there was a mix of 50+ runners ready to tackle the course. The RD gave a warm greeting then began to show a collection of DNF prizes everyone could choose from once they drop from the race. I found this odd that we was offering these the gifts. Now my thoughts were, "What have I gotten sign up for now."

7:00am on the dot and we are in motion heading down a short section of bike path towards the trail. The first mile was a rough but still runnable trail. Nothing out of the ordinary and the pace felt comfortable for a 100K. The second mile things got a ;little bit ugly on the trail. This mile had a lot of thick black mud patches that you could not get around. Trying to avoid some deeps spots you would accidentally find your other leg almost deep knee in mixture of water & muck. With my ankle socks it would pack in around my ankle bones then work its way towards my toes.

The third mile I was presented with the three big hill climbs. The first was Ed, then came Fred and then Chuck Norris. After climbing each one you had to descend back down. One of the descents was called Geronimo drop. Two of the drops provided ropes for the runners. The climbs over this mile and a half section were some of the steepest climbs I have ever dealt with in a race. Each one felt like a 70 degree climb; the kind where your hand can touch the earth in front of you as you climb.

Shortly after the climbing section there was a half mile of runnable trail again bringing me into the aid station at mile 4.33. Always great conversation there with the volunteers as I completed each loop. They would provide me updates to as how others were doing throughout the day. On my forth loop I remember they specifically telling me good job as I was only one of four runners that had not opted for the DNF. I quickly realized that meant Ken & Andrew had dropped leaving me out here to suffer on my own, ugh!!

Leaving the aid station from there to mile 7 it was mostly a very runnable jeep road section. Each loop I made sure to pick up the pace in this area and run 80% of it. The few hills I would take a walk break to ensure I had legs for later in the race. If you do this loop this is a key area to make sure you run.

Mile 7 started with a high grassy area with no shade in sight. They used a riding lawn mower to cut a path that went back and forth about six times across this big open field. Then dropped you back in the woods on to the trail. Again this was still runnable with only a few hills that are still runnable, but I choose to walk them because I had to repeat this over and over throughout the day. Even going from mile 8-9-10 the course stayed on a trail that would briefly climb and drop through the woods. The only slow down came from the few dozen down trees. Almost all of them I could jump up on to them then leap forward back on the trail.

Finishing out the loop I came up to the "stream crossing."  The stream is actually the Grand River and is nowhere in any classification of a stream. Looking at the picture I attached you enter the river on the right side in the bay looking area and work your way up and around the island towards the left. Eventually, you end up on the bank on the left side of the river. If you look closely you can see a small building on the left side of the photo to give a perspective of the size of the river. Secondly, it was mentioned knee deep maybe waist in some spots. My first step was knee, second step went thigh, third went to waist, forth went to my chest. The temp of the water snapped the breath right out of me each time. Some of the other runners were neck deep in the river. At this point I was happy to be 5'11" crossing this thing.


Once you climbed out of the river they logged my lap on the board and gave a congratulations on completing another loop. After my second loop I began to see why the pre-race briefing included DNF prizes. Not wanting to DNF I pushed on for another loop. Completing my fourth loop I realized that I would be completing my fifth loop around 7:45 and that meant the sixth loop I would not be allowed to start.

I accepted my DNF prize and thanked the RD for putting on such a challenging course. He grinned and said, "glad you enjoyed it." It was a tough course and knowing I went more loops than everyone but the two finishers I feel rather good about that. My 50K split was 7 hours and 7 minutes netting me a 5th place finish in that distance. The overall time for my 41.33 mile distance was 10 hours and 4 minutes. 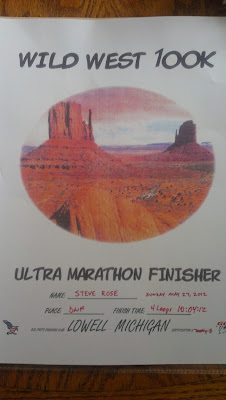 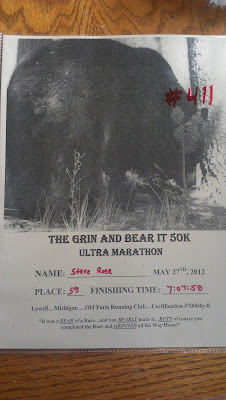