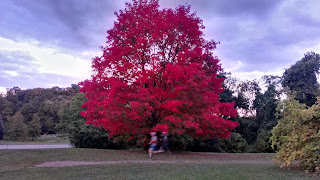 Looks like the entire month of October blew by like the leaves on the trees. Saw a lot of beauty and really enjoyed the time spent during the month. Started out the month with my girlfriend visiting and running some of my favorite places. The color change was in full effect making each run very scenic.

Middle of the month gave way to my first 100km race. The Top of Michigan is a point to point from Gaylord to Mackinaw City by the bridge.  After convincing several friends it was more of group training run. Mark, Melissa, Ken, Kurt, Andrew S, Andrew H and me were all part of small group working together throughout the run. The beginning were we much tighter together as we eclipsed the 50km the group began to form smaller groups. The course is a converted rail to trail that is very flat and wide enough to pass with no issues.  The colors on the trees were changing giving a lot of moments for picturing taking. The constant rain and cool temps provided the challenge to the ultra. At one point the rain to a light sleet which lasted only for a few minutes. I was able to make it to the finish just before darkness closing out the run with a personal best of 12:46:59. 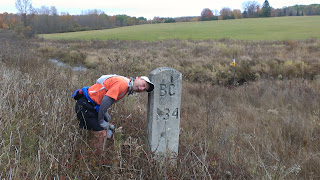 Then it was a short tour of the city by pacing the 4 hour 40 minute runners in the Detroit Marathon. This was my third time pacing at the marathon and by far my biggest group of runners. At the start I had about 17  people all eager to join me for the tour of Detroit. The weather was ideal with warm temps and clear skies. This was the best weather I have ever experienced in any marathon!!Around the half I still had 90% of them in viewing distance. By the end there was five of us. Three of us crossed the line together and two were just a few minutes behind.  Two runners pushed ahead around mile 23 and finished ahead of the group. Focusing on the two I had and wanting them to finish I held back on pace and finished 4:40:42.

Finally, it was time for one last race of the season. Headed out to Arizona for Javelina Jundred. Covered 78 miles in 13:45:24. Placing 34th in the 100km. Another great October run with beautiful weather of clear skies and at night a full moon. The course is 15.5 miles and is ran washing machine style six times (essentientally back and forth) then the last loop is cut short for ten miles giving the course 102 miles of joy. My crew/pacer was key in my first four loops being so successful. Erin had bottles, food and ice ready each time I came through the start/finish. Her smile was contagious and towards the end of each loop I was always looking forward to it.  During the loop there were four aid stations. As the temperature neared the 90's I would have a volunteer spray me down with cold water. With the pumpkin pie, cytomax, ice water and excitement of friends I sailed through the daytime. Heading out for the fifth loop Erin joined me. The average was 3 hours 10 minutes per loop on the previous loops; this loop took just over seven hours. About two miles in my Achilles were tightening up and gradually over the next few miles the tightness worked it's way up into my hip flexors. I was reduced to a slow and extremely painful walk. Physically I knew after several miles I was not going to finish the 100 mile option and end up taking the 100 km belt buckle option. At one period I was given some bio-freeze and Tylenol to cover up the pain, but that only minimized it a little. Once the loop was over we checked me in to the medical tent to evaluate my condition. The medical staff determined that my achilles were so tight that they were on the edge of detaching part of my bone off the heel. Knowing I want to run again I went over and climbed into a sleeping bag calling it a night.

Overall, running three races of those sizes in three weeks straight taught me my body needs more recovery time. Even the week after Javelina I am still having some discomfort in my heels.Covering over 166 miles of racing I saw a lot of beauty and really enjoyed the time spent with my close friends. Going into 2013 I will still be running and spending even more time with them.
Posted by Unknown at 12:16 PM