The year started with a bit of tendonitis in February that took me out of running for about three weeks.  Coming off the injury I broke my first PR of the year the following week at the Cowtown 50K. Building my base over the next several months I was focused on being strong for Leadville. In May I entered the Northville Road Runners 5K. With a 19:09 I was the overall race winner; second PR of the year. Then came the Maybury 8K Classic in July setting my third PR of the year and grabbing a 2nd place in my age group. With more of an emphasis on speedwork I entered a local one mile race. Thus, setting a new mile PR with a time of 4:54. Second time this year being the overall winner of a race. With a crew and pacers I then landed in Colorado for the Leadville 100M. Completed the race and moved on to the Milford 30K shortly after. Then setting my fourth & final PR for the year. The following weekend I impromptu headed into Canada to run the Haliburton Forest 100M. Ran strong in the first 75 miles then slowed down from exhaustion and finished in 25 hours. Then in October I jumped a flight to Southern California for the Twin Peaks 50M. This race has a ton of elevation climb . This race became one of my all time favorite races of the year. Completing that race gave me enough finishes for the year to enter UTMB. Then in November I headed to the Mark Twain National Forest for the Ozark 100M. Got tripped up around mile 26 and eventually surrendered to unbendable leg at mile 81.5. Then taking another 3 weeks off to recover from that mishap. First week of December I jumped in a local 5K race and placed first in my age group and 31st overall with a time of 19:26.  The year


Now for the awards: 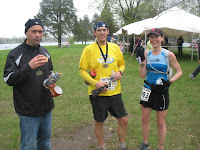 Designer Award
Keith "Milkman" Kohler
Put together all the artwork for the "BIG" races. Giving each race more of an adventure and a personal feel. Below are two of his 2011 designs. The left one is the club design and the right was the group design for Leadville 100. He also designed the 2012 Massanutten "40 year Pilgrimage."

Sidekick Award
Kenyon Waugh
Colorado Native who gave up a weekend with his family to assist me in the Leadville 100M. Arrived Friday night to have dinner and camped out in the woods. Saturday spent the day watching the race until 9:00 pm then paced me through the next two sections of the course. In race reports it warns people not pace these areas and he got me through them. On top of that he beat the planned splits!!

Sherpa Award
Tiffany Guerra
A SoCal local who picked me and transported me to the Twin Peaks 50M++. Then she set the course record at the event. After the event was finished she then took me back to LAX to fly home the same night.